In Loving Memory of the 13 American Service Members
August 26, 2021 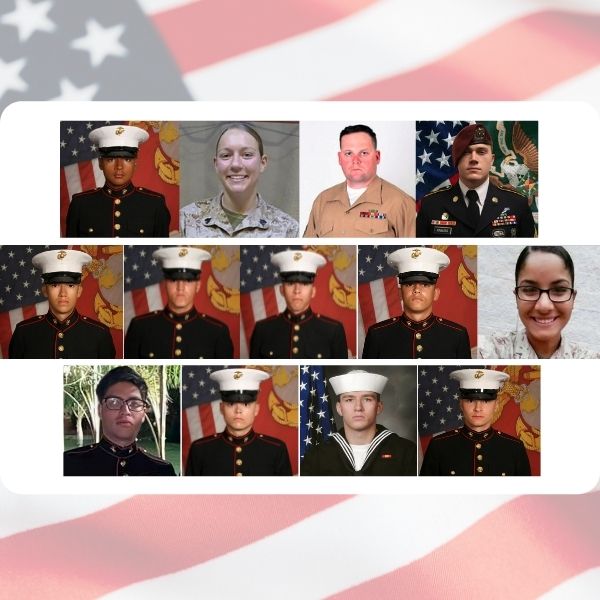 On Thursday, August 26, 2021, 13 American Service Members lost their lives in the airport attack in Kabul, Afghanistan. Brunswick Memorial Home expresses our deepest condolences to the family and friends of all thirteen service members. Thank you for you service to the United States of America. Your selfless service and acts of courage and bravery will always be remembered. May God protect our troops and all those standing watch.

May God comfort the families of these 13 American Service Members and bring healing for the pain of losing your loved ones. Please accept our heartfelt condolences. Greater love has no one than this: to lay down one’s life for one’s friends in this case one's country. Thank you for the ultimate sacrifice. Rest in Peace brave soldiers.

Please accept my sincere condolences. I pray that these soldiers rest in peace.know that I believe they are all in God's hands and in a much better place. RIP and my prayers for their families ! 💓💓🙏🙏

Words cannot express my deepest condolences to all the families. My heart breaks for you. May we never forget to honor the sacrifices that our service men and women have made. Rest In Peace. ❤️🇺🇸🙏

To all the families that have lost a son or daughter words can't express what you are going through. May they REST IN PEACE . They paid the ultimate sacrifice for their country.They are HEROS

Thank you for your service to our country. You all paid the ultimate price losing your young lives. May you Rest In Peace. My sincere condolences to your families and friends. Fly among the angels and watch over your family and friends and the country as you did in life.

No one owes more gratitude and respect to these brave soldiers then immigrants, who escaped their socialist nightmares, and are embraced by these protectors of freedom here in the greatest country in history. We, as Americans now, united, shall not take for granted all the blessings we are gifted by Patriots. Let theirs sacrifices fill the cup of God's vengeance towards those who caused, and who allowed the tragedy in Afghanistan to unravel.

May their souls Rest In Peace
For the love and compassion. That they shared for others
Carry their families thru the rest of their years to
know they where hero’s. In our eyes.
May god bless them
May your heavy hearts ease the weight over the years to come for missing them

May God Bless these and all of our brave service men and women who paid the ultimate sacrifice in service to our country. May God Bless their families and may they know that an entire nation is praying for them. 🇺🇸🇺🇸🇺🇸

Heart breaking. May we all never forget to respect and honor the sacrifices that our service members and their families have made and will continue to make for our freedom.

May God be with the families of our brave serviceman who lost their lives.. We continue to pray that they will Rest In Peace in heaven.. We need to pray for peace in these uncertain times.. God bless our servicemen and women..

God bless our brave servicemen and women!! And may the Great Living God deal as He sees fit with the perpetrators and the leaders who were derelict in their duty to our brave men and women who made the ultimate sacrifice!

Thank you for your service to our country. May God grant you and your families peace.

Thank you , Brunswick Memorial Home , this is quite thoughtful and I have never seen anything like this ever before !!
Joe Bailey
Milltown

God bless you all , bless your families and all families who have lost someone while serving in the armed forces to protect our freedom . Pray for peace ♥️🇺🇸

The services for In Loving Memory of have not yet been added. Please sign up below to be notified when the services are ready.

The attached photos are added to the memorial of In Loving Memory of the 13 American Service Members to help share their legacy.

Please help memorize In Loving Memory of the 13 American Service Members by recording your attendance below.

Thank you for sharing your memory of In Loving Memory of