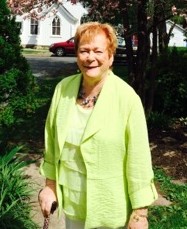 Known to many as Kate, she was born on July 23, 1933, in Englewood, NJ, to Mary (O'Brien) Cooke and Edward Cooke. She graduated from St. Cecelia's High School in Englewood in 1952 and then worked for a variety of area companies (Bendix Aviation, Prentice Hall, Curtis Wright).

She married Robert (Mac) McAteer on January 30, 1960, and together they lived in Hawthorne above her in-laws, then bought their first home in Rahway, and finally settled in South River where they spent most of their married life. For 18 years of marriage, they raised their four children and Kate was involved in all the activities of their family: Girl Scouts, Boy Scouts, a charter member of A.L.I.V.E. (families taking an active part in the religious education of their children) and the PTA. As her children grew older, she started working as a temporary secretary locally and in 1976 went full-time at Tenneco Chemicals in Piscataway, NJ. After her husband's passing on January 28, 1978, Kate reduced her work at Tenneco to part-time.

Always eager to learn, Kate didn't ignore her new unwelcomed reality as a single parent who also was facing the need to find a full-time position after an 18-year pause. But just like any other challenge she faced in her life, she approached it head on. In the fall of 1979, she enrolled at Middlesex County College having not been in a classroom since her graduation from high school some 30-years earlier.

For one of her first courses at Middlesex she wrote the following: "Eighteen years ago I was a secretary and found it exciting, challenging and rewarding. Today, a widow and mother of four children (who will soon be out on their own) I have to prepare for my future ... the secretarial field is changing and unless I want to become nothing more than a clerk, I must acquire more skills and knowledge to meet the challenges I will face tomorrow... Now, a year later, working three days, sometimes four, being a full-time mother, homemaker, and solver of all problems, there is just enough time left, three nights a week, to attend Middlesex College and take business courses to prepare me for my future, my new life."

Going back to school sparked her innate love of learning and meeting new people. She went on to have a long career at IBM in Dayton and then in 1991 at the age of 58, she applied for and was appointed to a new exciting role on the "help desk" at IBM's Sterling Forest, NY, location before taking early retirement in 1998.

Kate embraced change and new adventures even in her retirement. She continued to work in part-time roles as she moved around the state of NJ: Hardyston, East Brunswick, Avon, Barnegat, East Brunswick (again), as well as a brief 2-year stint in Dublin, CA. Most recently Kate lived at Sunrise in Wall Twp. She loved working and living in communities where she could be around young people who she called "our hope for the future." It's not a surprise then that many of her favorite people in the later part of her life at Sunrise were the young staff who would share with Kate stories of their own dreams, aspirations, and struggles. During this past most challenging year Kate felt particularly close to and supported by three staff at Sunrise: Jaybe, Nikea, and Q.

Throughout her life her ultimate focus was always to keep her family together. While she enjoyed taking trips and cruises with friends, whenever she was asked what she wanted for her birthday or Christmas it was for her to be together with her four kids, their spouses, and her five grandchildren, her sister-in-law and her two brothers and their families. Nothing brought her more joy than a room full of laughter, love, and storytelling with her family.

Family, for Kate, naturally included of all her children and grandchildren's friends as well. She was "Kate" or Grandma Kate to our chosen extended family too. She had plenty of love to go around and was happy to share it.

Kate is also survived by her two brothers, Joseph Patrick Cooke (and sister-in-law, Jane Cooke) and Edward Cooke as well as her husband's only sibling, Barbara (McAteer) DeKorte. She was known as Aunt Kathy or Aunt Kate, depending on the decade, to her five nieces and nephew, and all of their children, who she adored and extended her unconditional love to each of them.

She also leaves behind her dog, Sammy, who has been lovingly taken care of by the Kane family as well as all of her favorite four-legged grandchildren & great-grandchildren (Daisy, Rooney, Wilson, Harley, Huck, Laney, Otis and Oahu).

Kate was predeceased by her husband, Robert, and her two nephews, Jimmy Cooke and Garyowen Cooke.

We would often joke with Kate that the convertible she owned was really her favorite child - she loved to take a drive with the top down on a warm summer night on the Garden State Parkway listening to Willie Nelson. As her driving days began to slow down, she found a new way to bring a smile to her face: religiously watching Steve Harvey and Family Feud every night, especially during the pandemic when there was so little to laugh about. We all knew that if we wanted to get Kate's attention we had to call before 7 PM when Steve would be on. Kate found great joy in Steve Harvey's humor and expressive comedy and she would say how fulfilling it was to get a few laughs in before bedtime.

It turns out that Kate and Steve Harvey have something else in common: they both see the value in lifelong learning and the promise of young people, particularly those who may be facing additional barriers to their ability to advance their formal education or career.

In lieu of flowers we ask that you honor Kate by making a donation to either the Harvey Foundation or the Monmouth University Scholarship Fund:

The Monmouth University Scholarship Fund. Checks can be made payable to "Monmouth University" and mailed to 400 Cedar Avenue, West Long Branch, New Jersey 07764 or online at www.monmouth.edu/give by simply noting Kate McAteer in the designation field. (This past fall Kate was an interview subject for a Sociology of Aging course at Monmouth University. The semester-long project meant a lot to Kate who loved sharing her perspective, but she also found it thrilling to be engaged in the learning process with a younger person; they were both learning from each other, she would tell us.

Due to the pandemic, there will be a private memorial and burial under the direction of Brunswick Memorial Home, East Brunswick NJ.

A Celebration of Life is being planned for this summer when we hope to be able to all gather together safely to honor Kate. Until then, we invite you to please visit https://www.forevermissed.com/kathleen-mcateer to post a tribute, share a story or photos of Kate.

The services for Mary have not yet been added. Please sign up below to be notified when the services are ready.

The attached photos are added to the memorial of Mary Kathleen McAteer to help share their legacy.

Thank you for sharing your memory of Mary